Tutkain is a Sublime Text package for interactive Clojure development, powered by nREPL. 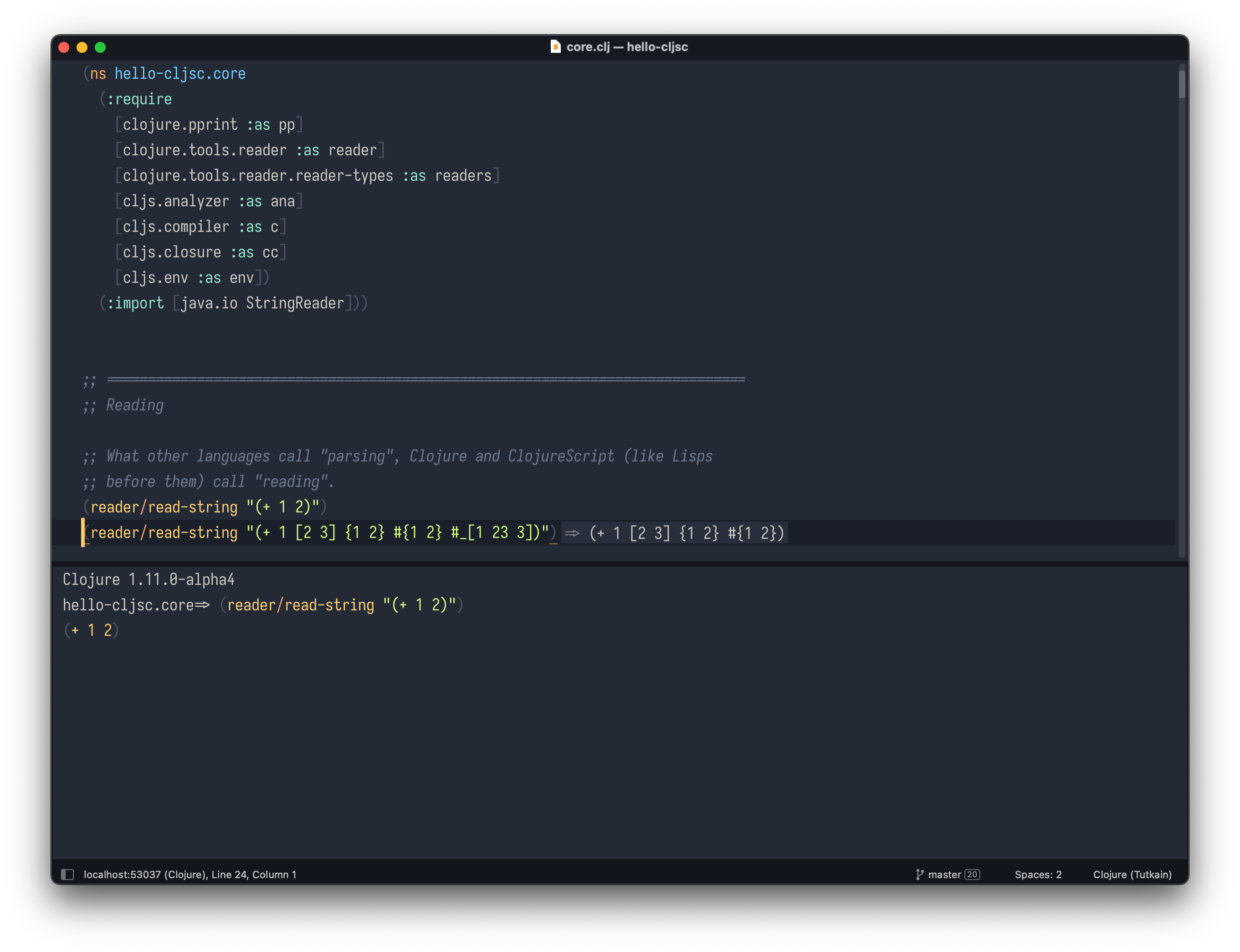 To start using Tutkain, you must:

If you already know how to start an nREPL server using nREPL 0.8.3 or newer in your Clojure project, you can jump straight to connecting to an nREPL server.

To start an nREPL server using the Clojure CLI tools:

To make it easier to start an nREPL server using Clojure CLI tools, you can add an alias like this your user profile in ~/.clojure/deps.edn:

Then, to start an nREPL server, run:

For more information on aliases, see the Clojure Deps and CLI Rationale.

Some of Tutkain's features (for example, auto-completion and goto definition) require nREPL 0.8.3 or newer. If your version of Leiningen ships with an older version of nREPL, you can configure Leiningen to use nREPL 0.8.3 like this:

Then, to start an nREPL server using Leiningen:

Connecting to an nREPL server

Once you've started an nREPL server, you can connect to it from Tutkain:

Once you're connected to an nREPL server, you can start using Tutkain to evaluate code.

With Tutkain, you can move your cursor anywhere on top of a unit of Clojure code — a form — like that and evaluate it. You can use Tutkain to evaluate code at three different levels:

To evaluate the form that's the outermost from your cursor, use the Tutkain: Evaluate Outermost Form command. Here's how to try it out:

Tutkain: Evaluate Outermost Form is the evaluation command you'll likely use the most. You'll probably want to set up a key binding for it after you've tried it out. 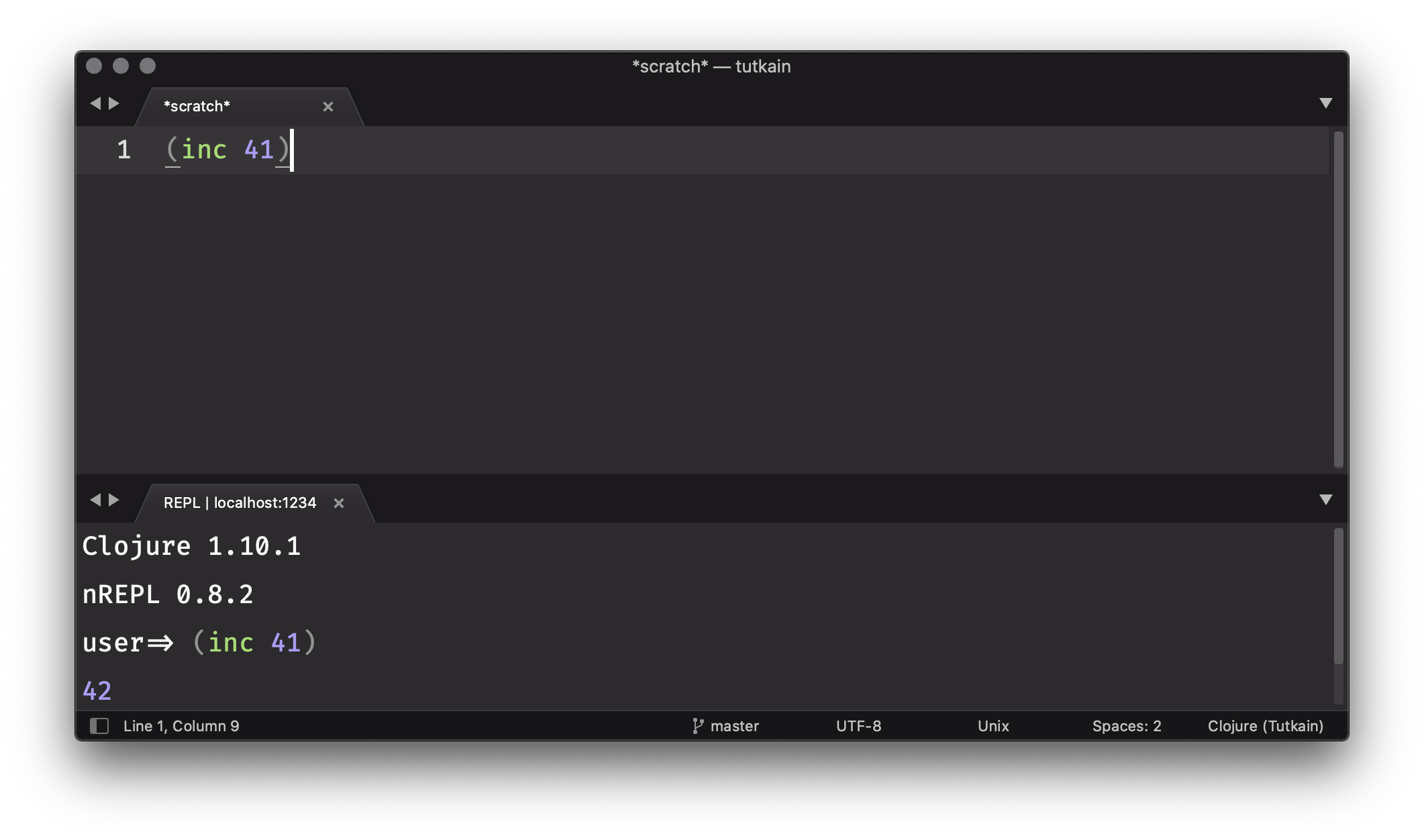 The REPL view shows both the input it received, user=> (inc 41), and the result, 42. The user bit is the namespace in whose context the code was evaluated.

If your cursor is anywhere on top of (inc 41), instead of (comment ,,,), Tutkain evaluates (inc 41). The reason for that is to support a common way of writing Clojure: writing forms inside a (comment) form and evaluating them. No one ever wants to evaluate the (comment) form itself.

You can also evaluate the form that is closest to your cursor — the innermost form. For example, imagine you have a form like this:

Instead of evaluating the whole thing, you can also evaluate just the (range 10) bit. Here's how to try it out:

Here's how Tutkain: Evaluate Innermost Form determines what to evaluate:

Most of the time, when you're writing Clojure, you're working inside a namespace. Here's what that might look like:

Imagine you want to load the forms that define square and sum-of-squares into your REPL. You could evaluate each outermost form individually, but sometimes it's easier to just load the entire view instead. Here's how to try that out: 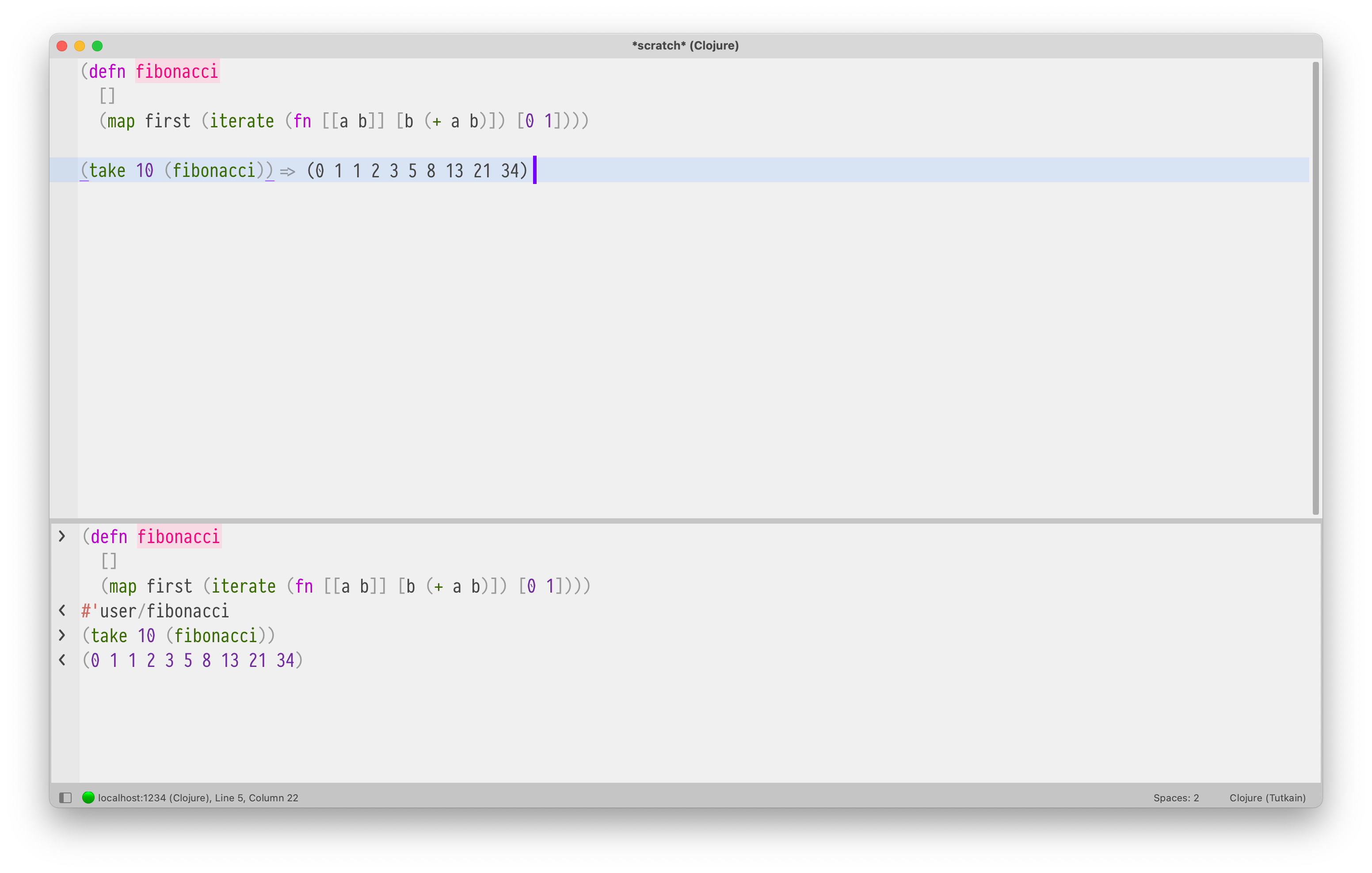 To show evaluation results inline, add a key binding for the tutkain_evaluate_form command and set the inline_result arg to true. For example:

To have Tutkain ask you to input a Clojure form and evaluate it:

In general, prefer using (comment) forms and evaluating the outermost or the innermost form over Tutkain: Evaluate Input. That way you can control whether to retain a permanent record of what you evaluate.

Once you're connected to an nREPL server, you can run clojure.test tests directly from Tutkain. You can either run all tests in your current namespace or just the test that's under your cursor. 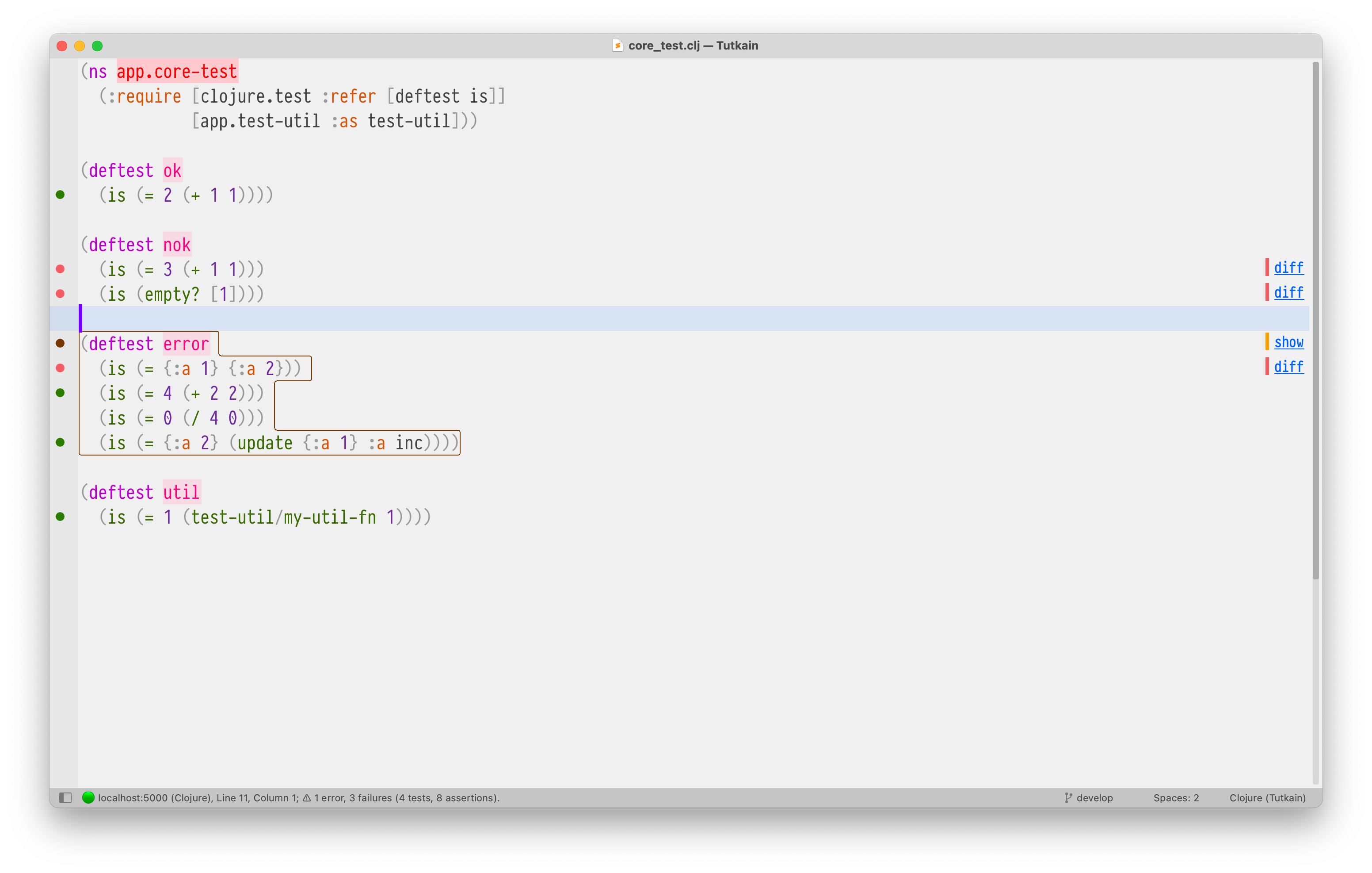 Running tests in the current namespace

Running the test under the cursor

Once the test run is complete, Tutkain adds markers into your view that indicate whether the test or assertion passed, failed, or caused an exception.

If a test assertion passes, Tutkain shows a green dot in the gutter on the left.

If you're not already familiar with ParEdit, the most useful command to get you started with editing Clojure is Tutkain: Expand Selection. It expands your current selection to include the entire form that's closest to your cursor.

If your cursor is on the left of [ and you run Tutkain: Expand Selection, Tutkain selects [n 5]. If you run the command again, Tutkain expands the selection to cover the entire (dotimes ,,,) form.

The basic rule is that the command first expands the selection to the nearest form. The next invocation expands to the innermost set of brackets, the next to next set of brackets, and so on until there are no more forms to expand to.

Tutkain comes with a ParEdit implementation. ParEdit is a tool that manages parentheses for you and adds commands for moving things in and out of brackets.

For now, see Dan Midwood's Animated Guide to Paredit and the fantastic Calva Paredit documentation for the kinds of things you can do with ParEdit. If you're already a dab hand at ParEdit, run Tutkain: Edit Key Bindings to see the ParEdit commands Tutkain supports.

Tutkain does its best to support multiple cursors. That includes ParEdit. If you spot something that doesn't work, please file an issue.

When you're connected to an nREPL server and type something into a view that uses the Clojure syntax, Tutkain tries to guess what you want to write. 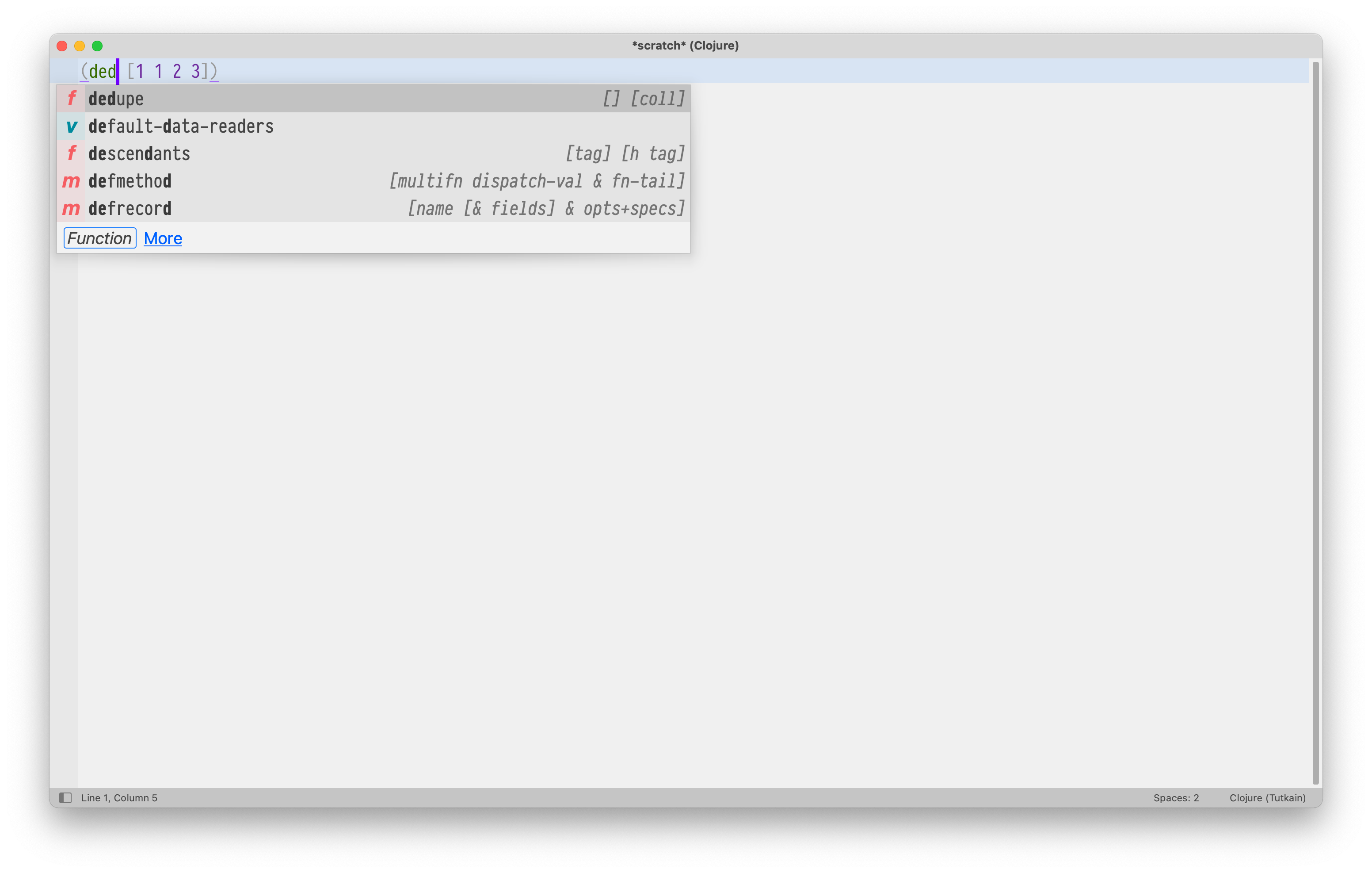 Once you start evaluating things, Tutkain starts suggesting those things as well. Given a function like this:

Once you evaluate that function using one of Tutkain's commands, Tutkain starts suggesting that function, too, when you type sq.

Tutkain does no static analysis of your code. It is only aware of the current state of your REPL. If you restart your nREPL server, that state resets.

When you're connected to an nREPL server and move your mouse cursor over a Clojure symbol, Tutkain shows you the definition of that symbol. 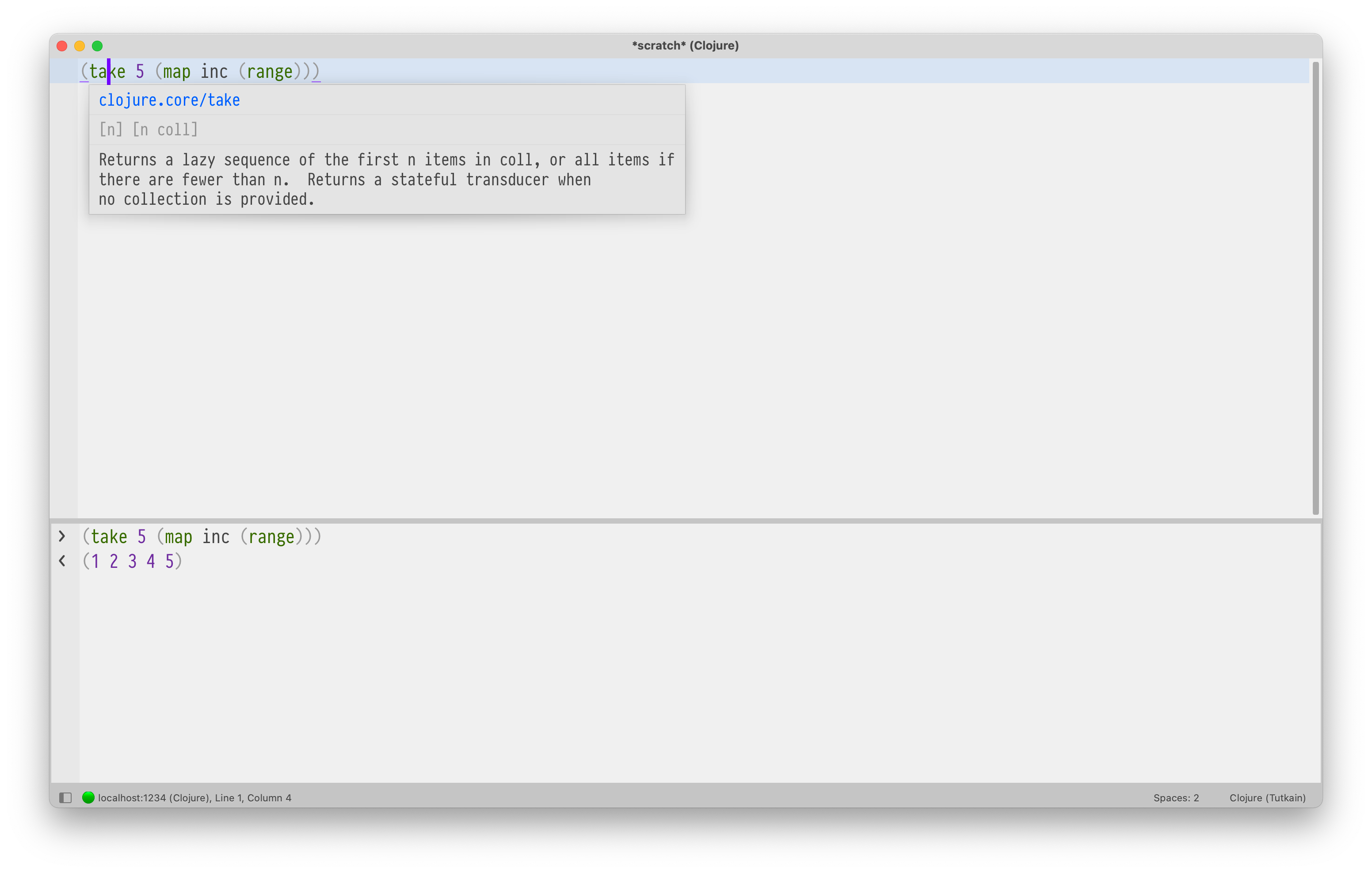 Tutkain also supports navigating to the definition of a symbol. That includes Clojure symbols defined in the clojure.core namespace and other symbols your project depends on.

To navigate to the definition of a symbol, hover over the symbol, and click the name of the symbol in the popup.

You can also assign a key binding for both symbol lookup and goto definition. Run Tutkain: Edit Key Bindings and look for tutkain_show_symbol_information and tutkain_goto_symbol_definition.

Tutkain comes with very few key bindings enabled by default. That is because it would be impossible to avoid key binding conflicts.

Instead, Tutkain comes with a set of example key bindings. You can pick and choose the key bindings you want to enable and adjust them to your liking.

The context key specifies that you can only use the key binding in a view that uses the Clojure syntax.

To get started, I recommend configuring a key binding at least for these commands:

After you're comfortable with using all of the above, you can configure key bindings for the rest of the commands (ParEdit commands in particular) as you go.

When you press Enter in a Clojure or ClojureScript view, Tutkain indents your Clojure according to the rules outlined by Nikita Prokopov in his article Better Clojure formatting.

You currently cannot configure how Tutkain indents your code. Ideally, we'd have something like gofmt and you'd never need to think about it.

Until then, if you want your code indented differently, I suggest using something like SublimeLinter-contrib-joker or configure a Git hook for the Clojure formatter of your choice to indent your code after editing it.

When you evaluate code, Tutkain always sends your evaluation to the REPL view that has focus in your current Sublime Text window.

To use multiple REPL views:

Tutkain is a tool I've made for myself. In the exceedingly unlikely event that you actually want to use it, you will inevitably find it lacking in one respect or another. Once that happens, feel free to open an issue or a pull request on GitHub.

I make no promises to implement the feature or merge your pull request. One of my main goals with Tutkain was to make it lightweight (for some value of lightweight), and I'd like to keep it that way.

You are, of course, always free to fork Tutkain and implement the feature yourself, if all else fails.

Then, when you open a Clojure(Script) file, you should see clj-kondo lint errors in Sublime Text.

Nothing seems to work.

If that doesn't fix the problem, please open an issue.

Integrating an editor with a Clojure build tool is hard. I don't think I really want to do it. Also, this way Tutkain is not tied to the build tool du jour. As long as it has an nREPL server to connect to, it's happy.

Besides, when you start the nREPL server outside the editor, you can restart the editor without killing your REPL. Sublime Text is very good for people like me who like restarting their text editor a lot.

If you really want to start an nREPL server from Sublime Text, you can use a Sublime Text build system like this:

Alternatively, use something like Terminus to run the tool of your choice in a terminal inside Sublime Text.

Before Tutkain, I used the fantastic Cursive for Clojure and other JVM languages, and Sublime Text for everything else. Eventually, I figured it'd be nice to use Sublime Text for Clojure, too. I wanted a Clojure editor that's simple, stable, and fast. The "stable" part I'm still working on.

If you use and like Cursive, CIDER, or Calva, chances are that Tutkain is not for you. If you're used to Sublime Text and you're just getting started with Clojure, Tutkain might at least serve as a gateway drug to better editors. If you're looking for a fast Clojure editor that lets you switch between projects quickly, you might want to give Tutkain a go.

If you decide to give Tutkain a try, be prepared for breaking changes. That's in addition to the usual cavalcade of bugs you'll see in alpha-quality software.